The loss of upland habitats to development, mining and agriculture has increasingly added pressures to already declining wildlife populations in Florida. This has been especially true for the gopher tortoise (Gopherus polyphemus) and its many associates. 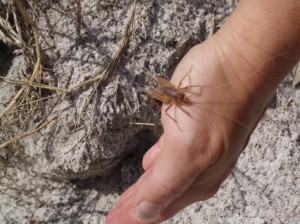 A gopher cricket emerges from a burrow

It’s All About The Burrows

At up to 40 feet long and ten feet deep, gopher tortoise burrows are an engineering marvel. Using their shovel-like front feet, gophers will dig down until just above the water table, to provide a nest of perfect temperature and humidity for their needs. These burrows provide much more than just shelter for the tortoise. These burrows provide permanent and temporary habitat for an estimated 300 additional species including other reptiles, a variety of mammals and a host of insects. For this and other reasons, gopher tortoises are considered a keystone species. The loss of their habitat and the subsequent loss of the burrows, affects hundreds of other creatures.

Once mining operations have ceased in an area, phosphate companies are required by their mining permits to “reclaim” or reform the land, returning it to conditions that closely resemble the original land use as possible. This land is then monitored for conformity to the plan and eventually “released” once permit conditions have been met.
One phosphate mining company in northeast Florida has committed to creating viable gopher tortoise habitat on reclaimed phosphate land. With help from Phoenix Environmental, this land has been home to a large population of relocated gopher tortoises since 2006.

Above left, a small piece of cactus called prickly pear is planted. Two years later, in the photo on the right, large patches of prickly pear have grown. This is a favorite food of the gopher. 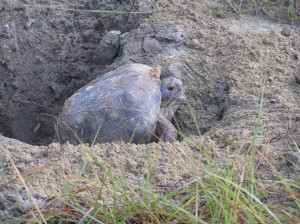 Gopher tortoises have inhabited North America for almost 60 million years. They provide habitat for many other species and are an indicator of ecosystem health. Creating habitat for them is a commitment that one company has made as a way to give something back to the environment.

This entry was posted in News. Bookmark the permalink.