If you are an Osprey, where do you want to live?

A power company had a problem. They wanted to replace a line of ageing wooden power transmission poles with new, longer-lasting metal poles. That’s a big project, but easy enough for them; they are set up to replace transmission poles and they do so all the time. The problem was Osprey nests. There were many established nests in the transmission poles, all along the existing route. The power company had done previous pole replacements along some of its routes, including one route where there were new metal poles directly paralleling a route of wooden poles. The power company equipped the new metal poles with a metal nesting dish, just for the Ospreys. The dishes were fastened to the top of the new poles at frequent intervals, a seemingly perfect place for the Ospreys to nest.

The problem: it didn’t work.

Only a single Osprey had actually nested in a metal dish, all of the other Osprey nests, dozens of them, were it the bracing structure of the older wooden poles. Given a side-by-side choice of where to nest the Osprey’s choice was clear, they liked the wood poles. There was something about the metal dishes that Ospreys didn’t like, or there was something about the wooden poles that they did like.

At the power company’s request, Phoenix Environmental began studying the problem. In addition to some regulatory issues there were 2 questions:

From previous mapping work Phoenix had done for the power company we had some actual nest location data. We plotted that data against aerial photos and researched Osprey behavior. There is more research to be conducted but so far a few certainties were identified: 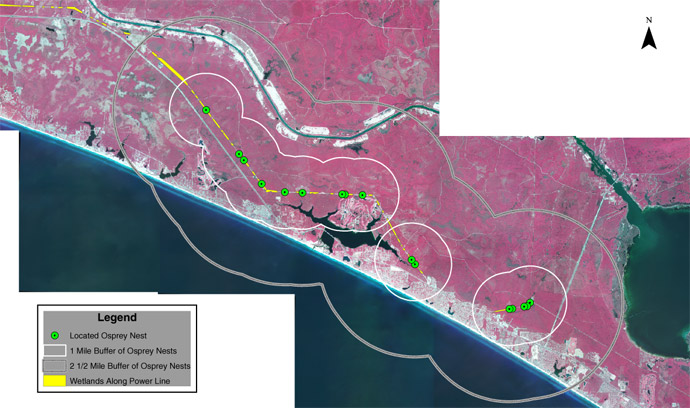 The type of nest to build seemed a bit easier. The power company had some ideas from previous nests they had used. There were a few criteria that we designed into the nests, just for the power company: 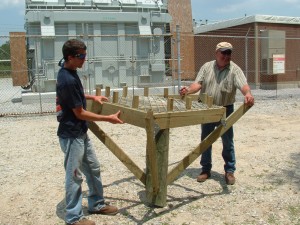 We have come up with a good design, similar in some ways to the power company’s existing nest design but far easier for line crews to install. We met with their environmental specialist, to “test install” a prototype nest. It worked very well and, with only a few refinements, this is the design we’re going to use. Phoenix will supply a complete unit, right down to the screws to install it. The power company will save one of the wooden poles as they are being replaced and with one of Phoenix Environmental’s nest units, make it into a free-standing Osprey nest, away from the power lines.

This is an on-going project, and becoming a builder and supplier of the nest units is something a bit different for Phoenix Environmental. The long term question still remains, though: If you are an Osprey, where do you want to live?

This entry was posted in News. Bookmark the permalink.