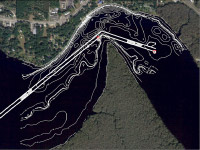 The GPS system is normally used to create accurate maps of any site. Any features can be mapped and the resulting map will show the feature’s true size and shape. Measurements for length or acreage will be readily available, both in the field and in the plotted map. The plotted maps can be placed over aerial pho- tographs or combined with existing AutoCAD or ArcMap data.

While creating a map of the location and shape of any feature, the mapping software can also record data about the attributes of the feature being mapped. A “feature file” will be created for any particular project containing specific data about the mapped features. For a timber survey, the data collected could include tree diameter, height and species. An- other could be for utilities, in which the collected data could include phone and electric lines, pipe diameters and manhole locations. Other feature files could be created for re- mote areas including wetlands and uplands, open water ponds and streams.

Existing data in standard formats (e.g. AutoCAD drawings and ArcMap shape files) can be loaded into the mapping software and the position and attribute data can be checked, updated or en- hanced. The GPS will guide the operator directly to any shown feature. The existing information about that feature can be confirmed and updated.

The data collector has the ability to accept elec- tronic data input from outside sources such as a sonar depth measuring unit. Phoenix owns and operates a boat and sonar unit for this purpose. A series of depth readings are recorded as the boat travels in a grid pattern over a water body. The resulting data is used to create a bathymetric con- tour map of the bottom. Many Phoenix associates are certified and experienced scuba divers and can investigate and map the underwater features of the water body to sub-meter accuracy.

A laser distance range finder can measure the 3-D position of a surface and use that data to model the vol- ume of an object. For example, we could laser an excavated area and determine the volume of the excava- tion. We could measure a material pile and determine the amount of ma- terial on hand. We could also use this laser to obtain the 3-D position of a feature that we cannot physically reach.